5 Amazing Reasons To Retire In Boise

Finding a good city to retire in can be incredibly difficult. Prospective retirees have to take so many different factors into account: cost of living, housing costs, available medical care, and much more. It’s an intimidating choice to make. But hopefully, we can make that choice a little easier when we say Boise is one of the best cities in America to retire in.

Here are Six Clear-Cut Reasons to Retire in Boise:

1. Boise Has Both Urban Outdoors Appeal

For retirees who love both the outdoors and the conveniences of city living, Boise offers a perfect middle ground.

First off, there’s plenty to do if you enjoy being surrounded by nature. The Rocky Mountains lay just to the east, and a river runs right through the city. There are plenty of accessible walking/hiking routes, like Table Rock and Hull’s Gulch, which are just a short drive away from even Boise’s most far-flung neighborhoods. Nature is easily accessible, whether you’re in the city proper or just outside of it.

There’s also a wealth of green space available. One of Boise’s highlights is the Boise River Greenbelt, a verdant walking trail that follows the river for a full 25 miles. It connects many of the major parks along the river, stretching throughout the Boise community. In addition, resort towns like Sun Valley or McCall are the perfect distance away for a day trip or overnight stay.

On the other hand, the area certainly won’t feel rural or isolated. There’s peace if you want it, but Boise can offer the kind of fast-paced city life you’d find in any other large city in America as well. From the Boise Art Museum to Idaho’s Discovery Center, there’s culture at your fingertips. Every year, Boise State University hosts a prominent jazz festival.

And if food or locally-brewed craft beer is more your speed, don’t sweat it. Downtown Boise happens to be known for great shopping, a lively craft beer scene, and great restaurants galore. Local staples like Barbarian Brewing, Cloud 9 Brewery, and Barbacoa Grill make downtown Boise (and the surrounding area) a melting pot of food, drink and culture.

Do you feel like going for a nature walk today, or do you want to check out a local street market full of handicrafts and delicious food? In Boise, you don’t have to give up either option. The choice is entirely yours.

2. Boise Is One Of America’s Fastest-Growing Cities

No doubt about it: Boise is on the come-up. The city is expanding rapidly in pretty much every category: jobs, educational opportunities, a budding tech industry, and much more. Retirees won’t necessarily be looking at getting a new job, but it’s still good to know. Any city that’s expanding at this rate has a healthy job and housing markets.

That growth will ensure that Boise remains a vibrant and modern city for years to come — a great indicator for retirees and young professionals alike. Lots of Millenials are currently moving in to benefit from all Boise has to offer, but the things that make it a good city for young professionals make it an equally appealing place for retirees who need a vibrant, well-rounded place to retire.

5. Even Though Boise Continues To Grow, Boise Remains Quite Affordable

Yet despite that growing economy, it’s still incredibly affordable to live in Boise. Minimal taxes, combined with low housing costs and reasonable utility bills, make it a great place to settle down. You won’t need to pay nearly as much as you would to retire in New York, Seattle or Portland.

There is a catch, though: because Boise’s growing so rapidly, housing prices are on the rise. Now is an ideal time to buy, before the growth hits another boom and prices reach unattainable levels. Don’t say we didn’t warn you! In short, Boise is affordable now — but you might want to take that opportunity before it disappears.

Check Out Our Other Articles on Home Hunters Boise:

4. Boise Is Blessed With All Four Seasons

Boise is also a great place to retire because of its mild weather. Residents can expect to get the entire gamut of seasons, but none of them will be unpleasant or especially uncomfortable. Summer won’t be as hot as it is in the Southwest, and Winter won’t be nearly as cold as it would be if you moved a little farther North. This could be very important for any retirees who might have health concerns in places that are particularly cold or particularly hot. Boise’s relatively comfortable climate should have something for everybody.

And if you got excited while reading about Boise’s wealth of outdoor opportunities earlier in this list, you’ll also be in luck. The accessibility to all four seasons means that whether you enjoy summer picnics along the river or quiet walks on winter nights, you’ll be able to do it in the area.

5. Boise Has A Wealth of Retiree-Centric Infrastructure

Finally, Boise’s a great place to retire simply because it takes care of its retirees. There’s a significant amount of infrastructure in place already that benefits anyone 55 years and older. The Dirk Eardley Boise Senior Center, for example, regularly runs programming from computer classes and tax assistance to drop-in fitness sessions and informal lunches. It even offers scholarships to anyone over the age of 62 who’d like to participate in its educational activities.

Retirees who might want to continue learning now that they’re no longer working will also be able to do so quite easily. Boise State University is located within the city itself and features around 170 academic programs and 200 clubs. So if you’ve always wanted to get that MFA or finish your four-year degree, Boise is as good a place as any to do it.

Furthermore, Boise has accessible, state-of-the-art medical facilities. St. Luke’s Boise Medical Center is located right downtown. It’s a large, modern hospital that handles most of Boise’s medical needs. St. Alphonsus Regional Medical Center, located slightly to the West, was also the first hospital established in Boise. Like St. Luke’s, it offers advanced care and trauma services to the public. It’s easy to access the hospitals from most of the city, but other clinics are also available for pressing medical calls on Boise’s outskirts. Emergency Medicine of Idaho and Primary Health Medical Group both offer urgent care locations to residents who are a bit further away from downtown.

Check Out Some Of Our Other Articles at Ryan Drew Real Estate: 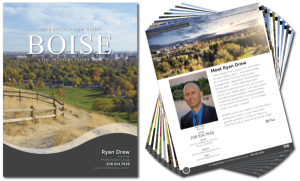